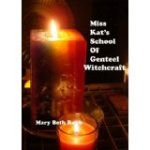 aIt’s the season that the newbies descend on public rituals for the first time.

R is for Reality

Or in this case – Magical Reality. Reality is mutable. It depends on the person’s viewpoint and if in a group, the group’s agreed upon on reality. The dictionary definition defines reality as the state or quality of being real but we all have an idea about what is real and what is not real. A synonym is verisimilitude and that is closer to what I think the definition is. Versimilitude is the appearance or semblance of truth.

An example of unique reality is whether you know or see ghosts. I know ghosts exist and they are part of my reality because I have seen them. There was a man who used to stand by my bed as a child and just watch me sleep. The man is also part of my sister’s reality because he also stood by her bed. We knew it wasn’t my dad because my dad snored louder than a Lear jet and we could hear him down the hall. However, he never stood by my brother’s bed downstairs so he wasn’t part of my little brother’s reality. We figured out who he was as adults. The original owner’s husband who had two daughters. We think he thought he was watching his daughters. My mom wouldn’t believe us but my dad did.

The same can occur at a coven or other magical group’s workings or even at a public ritual. TOILA used to put on large public Samhain rituals and the first time one of the priestesses brought her kids to ritual things happened. One kid freaked out because when we called the spirits of the dead, he saw them come and D came and got me to talk to M and her youngest daughter just thought she was at a really cool Halloween Party since she had been warded before she ever got there in case she went home and told where she had been to the ex-husband. Two separate but very real worlds on the same plane.

The majority of our coven shared a large house when we started but one pair bought a house in a neighboring city and were moving on November 1. So part of our Hallows ritual was to clean house of all the magical workings we had done. The house was always a little strange. The TV went on and off by itself. If you were in one bedroom asleep on the bed someone non corporeal would come and bounce on the end of your bed and when you turned the light on no one would be there. Lights came on and off by themselves in the middle of the night.

So we started at the top of the house with brooms sweeping the energy and singing and it quickly became apparent that someone was running in front of us and they were getting angry. Two of us could see her and the rest could feel her anger. When we were done we sat in the circle in the living room and it felt like we were being watched from an outside window and then from the living room rafters and that there was a lot of anger involved so we started singing calming songs. Someone came in the front door which we had left open and sat in an opening in circle between K and I and I could see her. She was in an early 20th century blue cotton flowered dress and seemed to be a bit slow or developmentally disabled. It was clear she thought that we had been playing once she had calmed down and was bouncing up and down like a small child that wanted to play. She was adult sized but her demeanour was very child-like. We tried to make clear to her that it was time for her to go and that we were leaving. I’m not sure if we got through because every time I go by that house it’s for sale, again.

She was very real to me and I ended up grabbing a piece of paper and drawing her for the others so that they could see what I saw. She then became part of their reality as she hadn’t been before except energetically.

So, where am I going with this?

Do not assume that your experience in circle or in any magical working is the same as the person next to you. It isn’t. It can’t be because we all have different degrees of openness, experience and training. If you aren’t open to it, things may or may not happen and different people’s senses. My reality may contain a priestess calling down the goddess and it may also contain the goddess she drew down or there may be nothing there at all. And that is okay. We all see/know/believe what is essential to us at the time. And someone who says they saw something may also be lying. Such as some people who after a guided meditation have elaborate stories about what happened on the meditation and they are flat out story-telling and trying to make themselves important and the person next to them had a very profound experience and chooses to say nothing because it was personal or so overwhelming they need to process it.

It’s all alright. We each do what we need to do to create the reality we desire and the person with the elaborate story may have nowhere else in their life where they can stand out. In their mind, they have found some place they feel they can be important and it’s alright. It’s still creating a reality that is real to them, maybe not to you but it’s real to them for that moment even if it’s just a momentary ego boost in an otherwise dull life.

So what is your reality as you walk through the world? Did you see the raven from the tree observing you? Did you see your totem dragonfly buzz you to get your attention? Do you live in your “real” world or someone else’s? Are you someone else’s creator of reality? Are you real, Velveteen Rabbit?