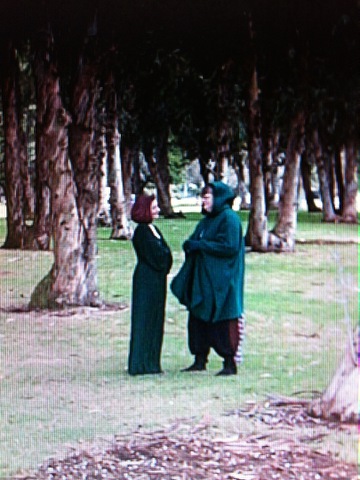 Because I love this photo of Diana and I at her ordination. I was her Guardian.

I find that in winter I’m held hostage to 3 dark goddesses who demand constant offerings, Arthritica, Xerosia, and Sonambula, These goddesses are the harsh mistresses of Winter.

Arthritica demands offerings of Tiger Balm, Thermacare and the occasional poor hapless Ben Gay. Arthritica is invoked with a sudden grab of a body part and the emitting of either a high pitched whine or an inappropriate 4 letter word. She is usually invoked when the barometer is falling or rain and snow are. She often makes her presence felt in mornings upon waking or when in the act of making a sudden grab for things. She has 2 children Bum Knee and Knobby Knuckles. She is a harsh mistress and all too often is our introduction to the Crone and Sage life paths.

Xerosia is a goddess most often found where the children of cold winters have lived or migrated to. She is particularly fond of people from Northern European countries like Scotland and Scandinavia. You know her by the cherry cheeks on children on travel posters and the cracks in your hands. Her dedicants can be found buying back scratchers at Cost Plus and rubbing up and down on rough surfaces like bears rub on trees. Her offerings are Advanced Therapy lotion, Bath oil, massage oils, large glasses of water and saunas. She also will accept a large serving of oily nuts or sardines. She loves houses with central air and a good blustery day.

Sonambula is the goddess of midnight darkness but her greatest delight is to make people sleep and to make them crave a nap.  As the nights grow longer around Solstice she likes to send people off to the land of Nod for short visits at inopportune moments. Should you want to invoke her, hot cocoa and warm milk are her offerings. She also likes to see her adherents in flannel pj’s and flannel sheets even if this can make the dedicant feel like they are re-enacting a Sunday School flannel board presentation.  She has several children , Snoozia, goddess of the snooze alarm and her brothers 5moreminute and Snorius, god of loud sleepers being the most invoked. Her dedicants can be found saying things like “I’m only resting my eyes!” and “How did that program end?”  People with pets may feel like their pets are in league with Sonambula on cold nights when the bed becomes crowded.

Celebrate the birth of the Sun
Light the way O Lucina.
Dance around the altar’s light.
Blessed be the Great Mother!

Measure flour, sugar, oats, salt and butter into bowl.
Mix with hands to a crumb-like consistency
Place half of mixture in an ungreased 6×10 Pyrex pan and press firmly
Cover with jam and top with remaining half of mixture
Press firmly
Bake in a preheated 325 degree oven for 40-45 minutes

The recipe can be used as a dessert by substituting 1 can of whole berry cranberry sauce or cherry or apple pie filling for the jam. Serve warm with ice cream.

Matadalon sat on a branch, The branch was the mottled gray and tan of the sycamore and he was having trouble deciding what he was going to be because Matadalon was a chameleon and chameleons are supposed to reflect what they are sitting on.

Gray or tan or maybe silver? Or maybe the green of the leaves? Or maybe he should just move over to that oak over there or over to that nice hibiscus… He was paralyzed with indecision. This is not a good thing for a chameleon. If he didn’t change soon he might get eaten and he had seen a hawk pass overhead awhile ago.

Matadalon crouched down and tried to think but the more he thought about it the more he was scared and frightened and couldn’t decide. Matadalon felt silly too. The other chameleons didn’t think about how to change. They just did it. They made fun of him or offered bits of useless advice that didn’t help when he started to follow it. And so he sat immovable on this branch.

He finally decided a light gray might do and he started to change to a silvery gray and stopped… What if it was better to be tan? Maybe a mix of the two colours? He was stopped halfway between the green he had been and the silvery gray. Now what?

Maty’s mother had been watching this from farther up the tree and was properly hidden in a mix of tan, silver and green. Maty’s mother shook her head and twirled her eyes. She had many children and none of them ever had a problem changing but Matadalon. Matadalon had to think and study everything before he could make a choice. This was not necessarily a bad thing and in fact, she wished some of her other children would think a bit more before they acted but she loved Matadalon, her thinking child and was proud of him. She needed to find a way to help him. What could she do?

Matadalon was crouched down and thinking when he felt a soft finger stroke his back and he felt himself change. He looked down at his legs and saw that they were a perfect match for the branch he was lying on. He looked up and saw a woman whose skin was a pattern of greens and blues and browns and tans all over her body. She had stars in her hair and really calm blue eyes like the waters of the sea that weren’t far away. She looked kind as he felt her finger down his back.

“Who are you? And how did you know I needed help” Matadalon asked.

“My name is Gaia and any chameleon that takes that long to change probably needs a little help.” She smiled down at him. “What made you take so long?”

Matadalon looked around to make sure none of his siblings were around. “I’m scared to change. What if I do it wrong?” Maty whispered. “None of my brothers and sisters have this problem, just me.” Maty said softly and sadly.

Gaia looked at him kindly. “Matadalon, if you don’t learn to change you could get hurt. See that big hawk up there?” Gaia pointed to the frustrated bird who had lost his prey. “You were almost someone’s lunch. Sometimes it’s good to think things through and sometimes you just have to trust you will change the right way and do it.”

“Really?” Maty said, he wasn’t quite sure he believed it. How could that be true? To change without thinking? Was it really that simple?”

“Yes, it’s really that simple. Change is part of life. We make changes every second we are alive. And the big changes can scare us terribly but you have to change because everyone else is changing too. This tree is changing every minute it is alive and so are you.”

“I know.” laughed the Goddess. “But that’s a part of life and growing too but I’ll give you a hint. If it means you don’t get eaten or hurt, it’s probably a good change.”

“But I can think about it sometimes? Matadalon looked up at Gaia.

“For the big things, like moving a nest but not for little things like matching a branch. Can you do that, Matadalon? Gaia looked at Matadalon kindly but firmly.

Maty looked thoughtful for a moment and decided he could do that. “Yes,” he said and looked the Goddess straight in the eye for the first time. “I can do that.”

“Good, be brave, Maty. I know you can do it.” Gaia leaned down and gave him a kiss which made all his colours change  to her colours and back. Gaia laughed and was gone.

Matadalon’s mother sighed a sigh of relief. Matadalon was going to be alright.

Maty lay on his branch, he could do this, he could really do this.

She changes everything she touches

And everything she touches changes…

Everything lost is found again

Everything hurt is healed again

From the Kore Chant in the Spiral Dance by Starhawk

I reblog this every year but it’s still as true as when I originally wrote it. The information came from a lot of old books in our family library.

The tree you place in the living room of your house is a prayer or at least it used to be long ago. So think of what you need as you place the items on your tree.

And because it’s sympathetic magic by their shapes they remind us. The Church banned decorated trees as pagan symbols until the 16th century.

Tinsel – is a prayer for rain.

Balls – were a prayer for the Sun’s return and to reflect the evil eye away from the house.

Nuts – are a prayer for fertility. Acorns of the druids were hung when gilded. Walnuts were hung on trees by the Romans long ago as it was the nut of the gods.

Fruit – is a prayer for abundance. And the Apple because of its star inside. Grapes for friendship.

Birds – are a prayer for good fortune, happiness and joy.

Pinecones – were to attract faeries

Lights – were once candles and celebrated the sun’s return also and lighted the dark northern European night.

Candy canes had the blood shed by women and the semen of men as it’s original fertility message in the colours of red and white. And the same colours in holly and mistletoe’s berries had the same message.

The pig for its sacrifice of food for the winter.

And the tree itself as being evergreen and bringing the promise of green in spring even in the cold dark of winter.

So whether you celebrate the tree of Yggdrasil, Yule, Jol, Winter Solstice, the Tree of Knowledge, Kikellia, Saturnallia, Mithras, Jesus, Odin, Buddha, Channukah, Christmas, Kwanza, St Lucy’s Day, Boxing Day, Bodhi Day or any other holiday, blessings on you and those you hold dear. And hold them tight for no one knows what the new year will bring.