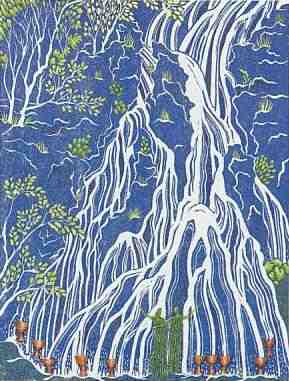 Generous fulfilment of desires from a source that is pure and cleansing. Reward for patience and love given selflessly. True emotional stability and freedom.

Open to the power of love. Be careful not to get swept away by it.

Imagine having a mother this stupid. Awkward!

Aisling sat staring out into the sheep pasture. She’d volunteered to stay behind while almost everyone went over to Si an Bhru’ (Newgrange) to watch the Sun return. She knew that the sun would return after her night with the Chief Druid. Her teacher was due to give birth soon and she was in no condition to walk to the barrow so a few healers and Aisling had volunteered to stay behind and have their own quiet Solstice celebration.

Aisling looked up at the stars. The night was dark and calm. The stars twinkled over head like a million tiny gems and thought of the watch taking place not so very far away. She was going to keep watch this night for all that were left here in the village.

She could hear the soft breathing of her teacher as she slept inside. She could see the candles in the windows of the healer’s cottage down the path. She knew it was very late because all was so still. The sheep were bedded down near their fold. The cattle were in their barn drowsing and it felt like she was the last person left in the world. And so she was the only who kept watch.

She vowed she would not fall asleep like last year. She was a year older now and not the baby who was always in trouble. She thought of all the interesting things that had happened this year. She put her head on her knees and wrapped the sheepskin tighter around her. It was getting cold and she wondered how much colder it was going to get before morning and whether it was time for a warm drink.

She looked in the direction of the barrow and it seemed like the there was a light coming over the ground from that direction. It lit the way as if someone had drawn a path in light. She had never seen that before and she wondered what or who was causing the lighted path. She wished she could follow the path but her duty was here tonight watching to see is the baby would come.

As she was watching the lighted path deer started to appear and walk confidently down the path and through the village. Aisling watched in awe. She had never seen so many reindeer and never in the village and she wondered where they had come from and where they were going. Following the reindeer was a woman in a dress made of the reindeer’s hides and she wore a cowl with horns from the reindeer. The woman left the herd and walked over to Aisling.

“Blessings to you this Solstice night.” The woman said to Aisling. “Come with me, Aisling.”

“Blessed Solstice to you as well.” replied Aisling, a little startled that the woman had even seen her sitting here in the dark. “Where have you journeyed from and would you like something hot to eat or drink?” Aisling offered.

“I wouldn’t mind a cup of warm cider that is on the hearth.” The woman said.

AIsling suddenly knew that this was not an ordinary meeting if the woman knew what was inside and shivered a little as she got up to get a cup for the woman. She hurried back out and handed the cup to the woman.

“I have come from far and I have farther still to go tonight but thank you for the warmth of the drink.” The woman said and drank slowly from her cup. Aisling watched her shyly and wondered if she could ask what she was doing when the woman spoke.

The woman smiled as she said. “I’m Elen of the Ways and tonight I walk the leys and you need to come with me tonight.”

“Yes,” replied Elen. “The paths on which energy travels easiest on the earth. I walk to connect them so you can use them in your workings.”

Aisling thought a bit. She knew her teachers had said it was easier in some places than others to work magic or create poetry. And she knew that the village had been sited along one of those paths as was the barrow where everyone else in the village was keeping watch.

“Did you just come from the barrows?” Asked Aisling.

“Yes, and the Chief Druid said you could come with me tonight. Now please, grab a cloak and come. Nothing will happen while we are gone.”

“I’m sure.” Elen said emphatically and helped Aisling get astride the reindeer that was patiently standing.

The woman started walking directly east and she walked faster that any normal human being could.

Aisling asked Elen where they were going. “Your Chief Druid thought you might like to help me open the way for the sun’s return in the east.”

“We’re opening a way for the sun?” Aisling was trying to understand but she couldn’t quite get there.

“Yes, I open the ways and that includes the paths of the sun energies to flow.”

They rode and walked until they reached the edge of the sea. It was just before dawn and the light was starting to turn a bit greenish in front of them. Elen stood with her staff on the edge of the cliff and motioned for Aisling to join her. The reindeer gathered round them keeping them warm in the chilly night.

“Stand here next to me, Aisling.” Aisling moved to stand next to Elen.

“What do we do?” Asked Aisling a little worried. Could she really have stopped the sun last year? Was the Chief Druid wrong? Aisling was getting even more worried. What happened if she did this wrong? Would the sun not return?

Elen looked at Aisling. “Don’t worry. The sun will always come back. We just open the way for the energy to flow across the land. It’s like opening a damn so the energy will flow. It slows down in the dark times and now will speed up again and you want it to bring health to the land.”

Aisling thought and then nodded, that made sense. “So what do we do?”

“We stand right here where the sun will hit our land first and then we open our hearts to the new sun reborn. Can you do that?”

Aisling thought she could do that but wasn’t sure exactly how because the sun appeared as a tiny light in the east and Elen flung out her arms and Aisling did the same facing the sun as it peeped over the edge and started to rise. Aisling needn’t have worried. The sight of the sun filled her with joy. She felt full to bursting with love and happiness and Elen gave a loud laugh and cry and Aisling felt the energy rush away.

The sun rose and Elen turned to Aisling. “Time to go until next year”, and she touched Aisling with her staff. Aisling shook her head. She looked around and she was back on the doorway of the cottage. She looked to the East and the newborn sun was rising above the meadows. She looked to the west and saw a herd of deer and a small figure wave and she was gone.

Just then behind her, she heard her teacher give a gasp. “Aisling, go get the healers.”

Aisling ran across the way. Time for a new son or daughter to be born here. Aisling smiled. This was a good day.