I’m going to miss you. 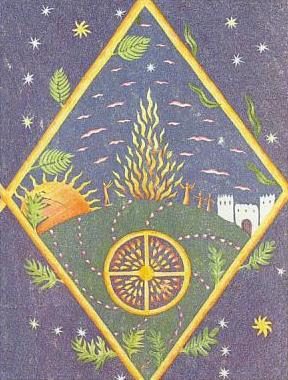 Celebration of health, wealth and security. A time to relax and enjoy the bounty of good fortune or labour. A holiday or festival in a time of plentiful fertility and creativity.

Enjoyment of nature, celebration, of the summer with friends, party atmosphere, being outdoors, feeling of freedom and fun.

Well, I don’t deal with many gods because I choose not to do so. I prefer to have relationships with goddesses with the exception of the Green Man who made it clear to me who he thought I belonged to and since he saved my sanity once upon a time when I needed it, he belongs in my personal pantheon. Not everyone who applies gets to be. I have sent both Herne and Jesus on their way when I decided I had no need to dive into those particular pools. I’ve written before about why Jesus got sent on his merry way and someday maybe I’ll write about why Herne was.

I’m polytheistic, not monotheistic and do not call everything Goddess. I do believe there are separate beings we call deities and not one all-encompassing energy with different names. I’ve met some face to face and Brighid is not the Morrigan and neither of them are Hecate or Freya or Kwan Yin any more than my friends Diana and Denise and Mary are the same person. I have no need of that particular Abrahamic mental crutch. Nor do I think everyone sees every deity the same way. One friend may show one face to another friend than I see because I need a different aspect or function and so it is with deities.

And that’s just it, we can choose our personal pantheons and who we choose to have a relationship with. Some Druidry systems demand that only Indo Aryan deities can be worshipped which is a bit problematic if Kwan Yin shows up to have a chat and since the more DNA testing is done and more people find out they have a more diverse set of genes than they thought, a might bit stupid. We all might have genes from Asia, Africa and the Americas as well as European/Indo-Aryan ancestors depending on how they got around. As someone descended from Viking stock that is known on Mom’s side and it can be assumed on Dad’s side because most of Scotland does have Viking genes, Vikings got around and they brought people home with them which might explain my dark eyed and dark haired cousins and they are the ones who still bear the Swedish last name not the blonds and redheads of the 3 of us with the Scots last name. My brother for all he was a dead ringer for Grampa Cumming could have easily posed for a blond haired, red bearded Viking and Grampa was 100% Scottish.

Then there are spirits and Spirit- Awen or whatever you want to call life animating force. I have no problem with spirits having grown up in a haunted house and worked places that had spirits that hadn’t decided to leave. Can get a bit weird but I’ve always found being polite and acknowledging their presence works best. Especially if they happen to be the kind to ghost that can reach out and touch someone.

I don’t think it’s a mistake that the word awen is the word for inspiration and the root of the word inspiration is to breathe and of course is the root of the word spirit. Sometimes I think spirit is interchangeable with soul sometimes not. I’m still contemplating that one. Either way it something that exists while we breathe and I think exists after. Old Sir Isaac Newton said no energy is ever lost and that something in motion stays in motion until acted upon by an outside source. So it seem to me that death is not an outside source normally baring car accidents and other calamities and if no energy is lost it would make sense that the spirit doesn’t die, it just moves on in a different form, always in motion. To say that death is the end doesn’t make sense in a scientific way let alone a spiritual way and since I have had more than one relative or friend check in with me after their alleged death, it seems to be true. It’s hard to argue with that when there are witnesses to the event that aren’t even related to the allegedly deceased person.

I also believe that spirit animates everything even things that most people don’t think have spirits or Spirit, things like rocks and trees and skies and even the sea. I’ve had too many experiences that have taught me unexpected things from allegedly inanimate objects.

So that is this Druids take on deity and Spirit. You mileage may vary.