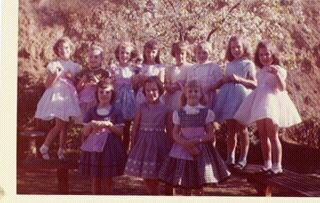 My bff’s 8th birthday party. I’m on the far left and have no clue what was going on with the pose

Once upon a time the Littlest Druid was down by the shore. The Druids had moved to their summer village by the water a few weeks before. Aisling had been sent to gather dulse again. It’s all she had done since they had moved and she was a little tired of it. What she was really tired of was not sleeping. Every time she wanted to sleep she felt like some one was watching her and it was diving her a little crazy and it was making her even clumsier that usual. So she was gathering the seaweed. She didn’t even like eating seaweed that much.

She just wished what ever was watching her would stop so she could sleep. Maybe if she took a nap? She rolled up in a skin she had found down by the shore to take a nap behind some rocks. She couldn’t believe her luck at finding it. It was a beautiful seal skin and some one had taken a lot of care to make it soft and cozy. She wondered who had been careless enough to leave it here in the rocks but since they had she was going to use it.

It wasn’t working. The sun was still too bright and the sand was itchy and the rocks were poking and she just wanted to sleep! So she gave up and folded the skin back up and went back to collecting the dulse.

She watched the gulls fly in and out and stalk the tiny crabs that lived by the shore and she picked up more dulse. She wandered up and down the rocky beach. She’d watched the druids take the coracles out to fish earlier in the morning and she saw them when they brought their catch home. She even saw the fish eagles out at sea hovering over the waves. The colony of seals up the beach had been making a lot of noise earlier but now they seemed to have quieted down to take their own naps in the sun.

Every once in awhile she sat by the waves  and watched the sets come and in and tried to see beyond the ninth wave where there was supposed to be magic happening all the time according to the boys but she never saw anything magical. She saw some dolphins leaping in and out of the waves playing. She saw some flying fish way out on the water. She watched the sunlight dance and sparkle on the waves and all the time she felt eyes watching her. She felt like they were focused on her back and for some reason not very happy with her. Well, she thought, that wasn’t exactly a new feeling. It seemed someone was always unhappy with her for some thing. Although, that seemed to not be happening as much lately. Things seemed to have been getting a little better until now. No one had really yelled at her in weeks. Just maybe raised an eyebrow. She just wanted to sleep, really, really, and truly sleep. She wondered if the faeries were doing this to her. Why they would want to do that she didn’t know she didn’t think she’d done anything to them. She got into enough trouble with out making them mad.

She huddled by the shore as the sun was starting to go down. It was almost time to head back to the village for dinner. She wrapped the skin around her. She was the only one left on the beach. She turned to go…

Aisling whipped around and didn’t see anyone. It hadn’t been very loud maybe she was just imagining it. She looked up and down the shingle. Rocks and a few gulls and sandpipers and that was it. Who had spoken?

This time she turned and saw someone her size on the rocks.

The person leapt off the rocks and ran toward her pointing at the skin around her shoulders.

“I hid it in the rocks and you took it! Give it back!” the person said.

“How do I know it’s yours and you aren’t just saying that?” Aisling replied.

He stood looking down and said quietly, “Because it fits me.” The boy was just her size and strangely silvery looking skin. He had huge kind brown eyes that at the moment were looking both uncertain and angry.

Aisling was confused. “Are you the one who has been watching me and what do you mean, it fits?”

“It’s my skin. This was my first time alone and I thought I had hidden it well and you took it.” The boy started to cry.

Aisling took off the skin in a hurry and handed it to the boy. “I’m so sorry. I didn’t know it was yours. It’s just warm and soft and very beautiful. What do you mean it’s your first time alone?”

The boy looked a bit guilty. “I’m not supposed to go ashore without my parents or the rest but I wanted to see what the land was like?”

“Do you mean you live in the ocean.!!!” Aisling goggled at the boy.

“Yes and it’s supposed to be a secret. You won’t tell will you?”

Aisling thought a bit. She thought it might cause a lot of trouble if she did tell and no one believed her so she said, “Help me pack up my basket and I won’t tell but you have to stop watching me!”

The boy looked at her. “Alright… You’re sure you won’t tell?”

“I promise on the hope of a silver bough.” Aisling swore. “if you promise to stop staring at me.

“Okay, what ever a silver bough is and I promise to stop staring at you unless you want it. I swear by the ninth wave.”

The two smiled at each other and packed up the baskets of dulse quickly.”

Aisling had been thinking. “Are you a ?”

“Yes,” the boy answered before she could finish.

“Okay, will you come and visit me again sometime? I get lonely gathering this stuff.” “If you let me have some,” the boy said with a grin. He slipped the beautiful silver skin over his shoulders and changed into a small equally beautiful seal and lollopped into the waves. A flash of a flipper and he was gone.

For the first time in weeks no one was watching her and Aisling relaxed and sighed. She picked up the baskets and headed towards the village and wondered when she’d see her new friend again.

To be humble, to be kind.
It is the giving of the peace in your mind.
To a stranger, To a friend
To give in such a way that has no end.

To be bold, to be brave.
It is the thinking that the heart can still be saved
And the darkness can come quick
The Dangers in the Anger and the hanging on to it.

Tell me what it is that you see
A world that’s filled with endless possibilities?
Heroes don’t look they used to, they look like you do.

Now you may hear the beat of a drum or the song of the wind. It may be the dancing of light on water or the midnight barking of the fox, but whatever awakens your desire to return to the wild,

The Shaman within you is ready for initiation into the mysteries. It may manifest itself in the form of a desire to study an esoteric science or philosophy and apply what you learn to the world. It may involve travel or even a personal sojourn for the sake of gaining confidence and experience. But however the desire to begin a new spiritual chapter emerges, you are now in an emotional and intellectual position to bring forth real change in your life for the benefit of everyone.

This process of focusing, mediating and applying wisdom and knowledge from the Otherworld to bring physical effects to everyday reality is the work of The Shaman.

Being a shaman, able to see the complexities of life and death, and acting on this knowledge for the benefit of all, can be a heavy burden to carry. (Responsibility, ten of wands).

The Shaman has a deep rooted balance within themselves, and can assume a place of status within society without compromising their integrity and losing sight of the higher purpose they are working for.